NOLA is preparing itself for Mardi Gras. Many houses have beautiful decoration in the typical colors (purple, green, gold). People on the street are waring metallic beads and/or masks in the same traditional colors and decorate their entrance doors and garden with it. They even have a cake for the season, which is called King Cake. Obviously in the same colors. It tastes like a “Russenzopf” with the topping of a “Schwedentorte” with sugar on it 🙂 And similar to our “Drei-Königskuchen” you may find a plastic baby in it instead of a little plastic white king. Although it looks quite special to our Swiss eyes, it tastes delicious! 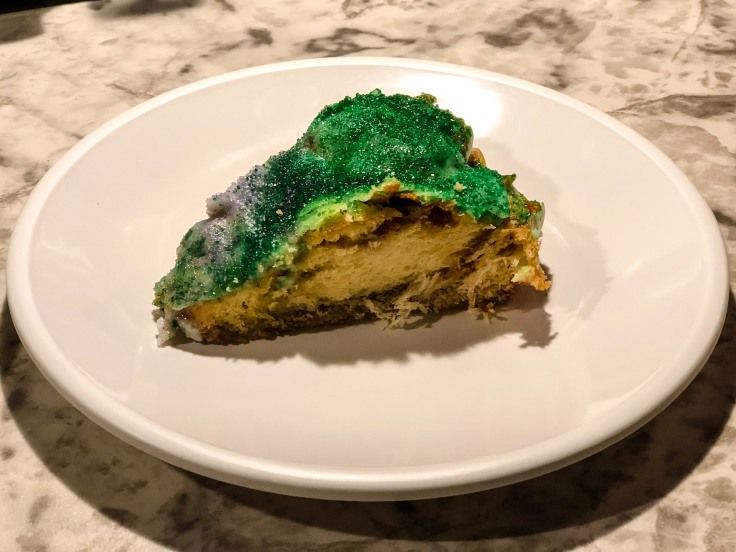 Music is all over the place in New Orleans. In every little bar you’ll find a live band playing Rock or Jazz. In every street corner there are street musicians singing and especially rapping.. and this astonishingly well.. and our favorite: People on all kind of bicycles with huge music speakers on it and blinking in all colors driving through the streets.

Similar to Switzerland they do have a lot of fog in the winter season. Less similar though are their bridges. Yesterday we drove 45 minutes over ONE bridge (no island or anything between), crossing a big lake next to New Orleans. You start driving on the bridge and if you forgot something at home, bad luck: You’ll drive 45 minutes in one direction and then back again.. so never forget anything before crossing this huge bridge! While driving over it, the temperature in the center of the lake (and bridge) fell down by 10 degrees!

And this has nothing to do with New Orleans at all… but these are just fun pictures of our car and show the difference of a real big American car to a normal typical Swiss car (a Mercedes coupé and a Audi Q7 (not Q5!):

4 thoughts on “Small stories out of New Orleans”